I am not sharing anything TOO techy tonight just my excitement for #FETC (Florida Education Technology Conference) and my newfound love for #twitter! 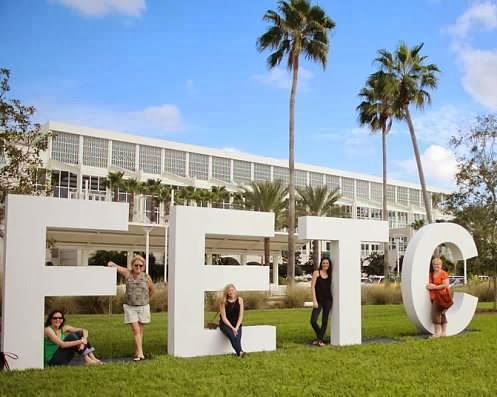 First let's start with FETC! Last year was my first time attending this phenomenal conference in Orlando, Florida. It was by far one of the most amazing professional development experiences that I've ever had. I learned enough from Leslie Fisher, Adam Bellows, Kathy Schrock and Hall Davidson in the opening Tech Shoot Out to be happy to pack it up and head home BUT it was a jam packed 3 days full of tech overload from some truly creative and talented educators from around the globe. Not only was the conference a huge learning experience but the weather was great and we spent a day at Disney World and an evening at Epcot. 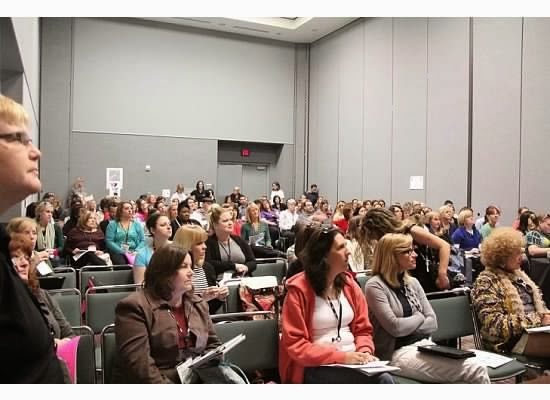 Meghan, Derra and I presented SCANAPALOOZA, a concurrent session about QR Codes integrated with the highest levels of Bloom's Taxonomy! 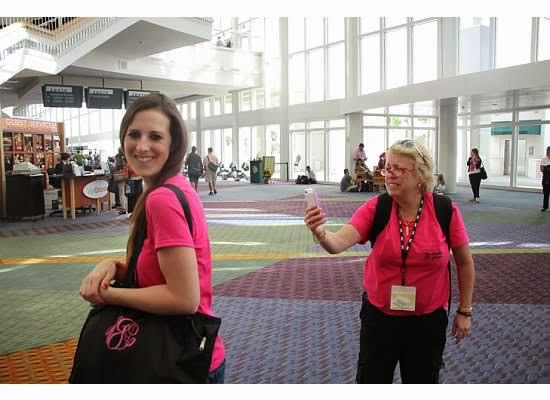 We had hot pink shirts made with QR Codes on them that linked to our video. The presentation was a huge success and we got tons of positive feedback. I can't wait to share our SCANAPALOOZA #2 presentation at FETC and will be posting it on the blog when I return! This year our color is LIME GREEN (not my choice but I won't get into that)! 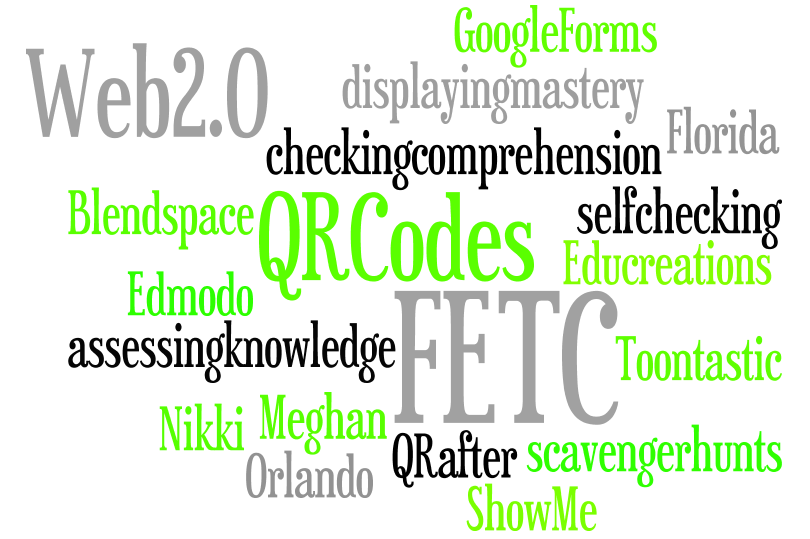 This year when we were given the opportunity to submit a proposal again the deadline got away from us but luckily FETC extended it and we were able to pull SCANAPALOOZA #2 together! Our proposal was accepted and we are off to sunny Florida again on Monday to attend and present at FETC! I am super excited for the opportunity to present and learn alongside of some of the nations most tech savvy and innovative educators! Tell me HOW YOU use QR Codes and what would you like to learn if you were attending our session? 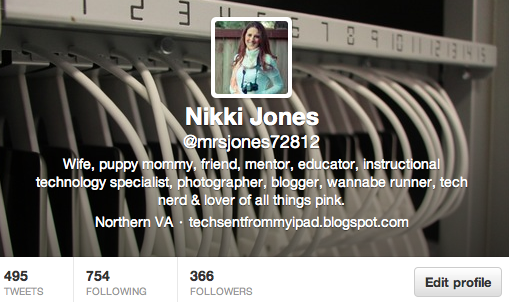 Now, about Twitter! I have had an account for months, well actually years and I haven't done much with it. I used it to enter contests and I would occasionally check out the #edchat BUT I never really "got" Twitter. I did a lot of observing and not too much engaging or interacting UNTIL recently. In anticipation of #FETC I started spending more time on Twitter and NOW I AM OBSESSED! I have already learned so much in the few days that I have really been participating and made some connections with other techy educators. If you don't "get" Twitter, I would encourage you to give it a second chance and find some #edchats to participate in and other educators to connect with.
Follow @mrsjones72812
Posted by Unknown at 6:00 PM 1 comment:

Happy Tuesday and snow day for lots of my blogging friends! I hope you kept warm as temperatures across most of the country were below zero! I was rather productive today and had an awesome free day! Against all rules I am posting a SECOND blog today.

I spent most of the afternoon working on a 5th Grade integrated QR Code lesson (math and social studies)! I used QRStuff to make the QR Codes, Google Map Distance Calculator to find the distance between the places and a site for conversions, call it cheating or time saving! Click each image to be taken to the website :)! 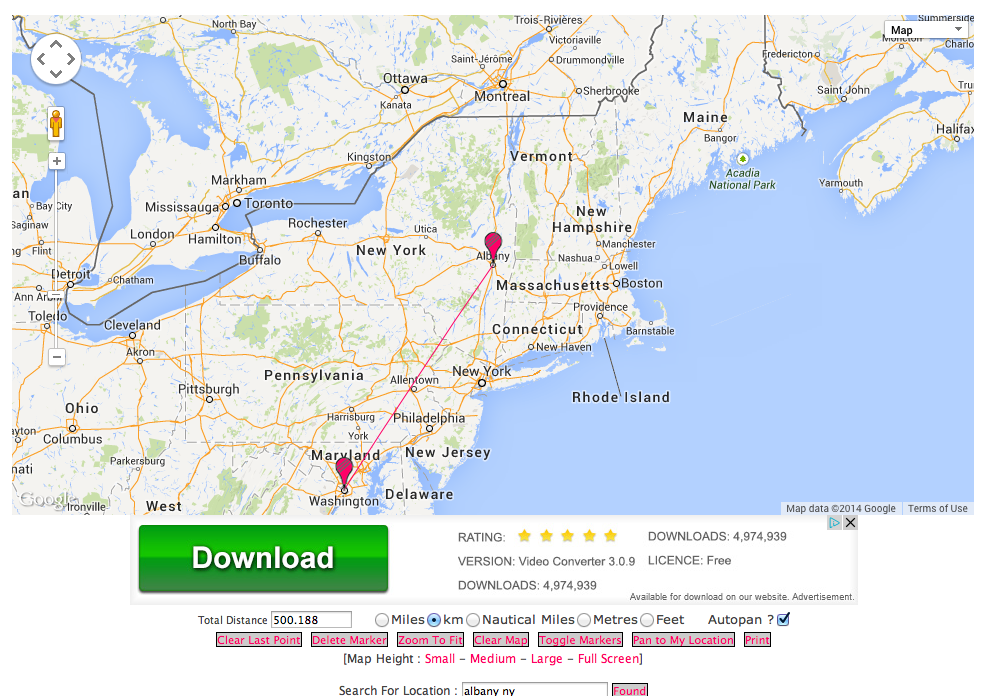 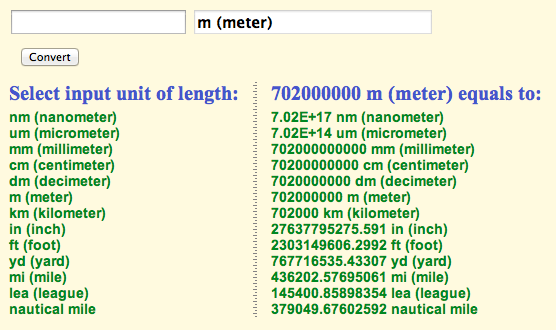 Here is the finished QR Code Scavenger Hunt which I will print and display around my room!

Here is the recording page that students will use as they work through the scavenger hunt. 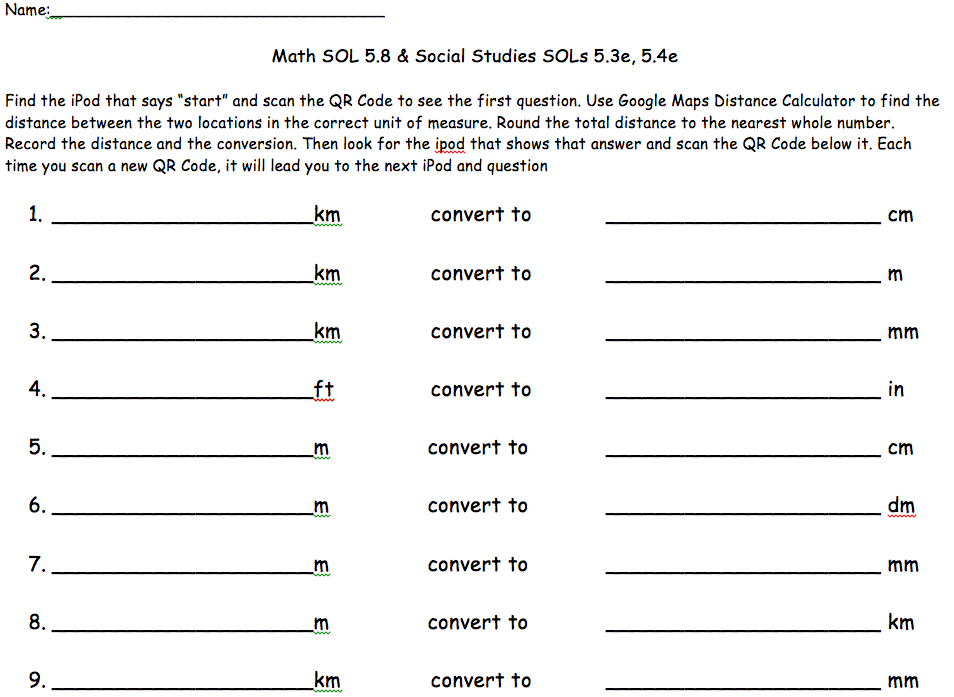 If you are interested in doing this activity with your students leave a comment and email and I will happily share the original files! You can always adapt and make changes so it will work for YOUR students :)!
Posted by Unknown at 5:38 PM 10 comments:

I don't know when or why the mustache became so popular and hilarious BUT it did! I also never would've guessed that I would be using a mustache app in an educational setting BUT I did. 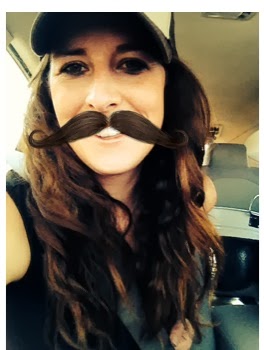 Yup, that's me with a mustache! 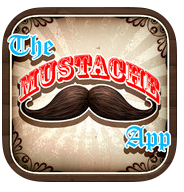 As I was stalking  checking the App Store I saw The Mustache App and downloaded it of course! At the time I was looking for an app that would allow students to create a surveys or analyze graphs for a first grade lesson. I didn't find any good apps and got distracted putting mustaches on everyone in my family :)! 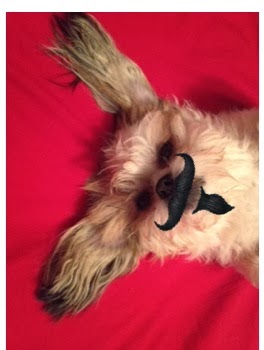 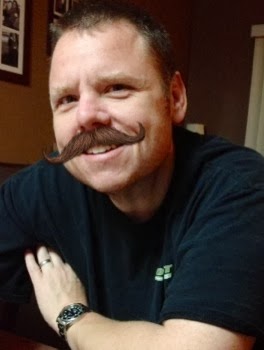 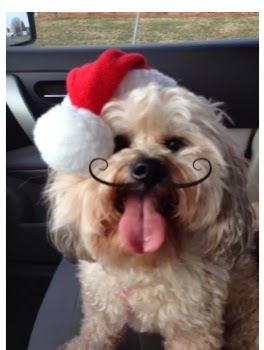 Then I went to Pinterest for a little inspiration and when I searched "1st grade graphing" this awesome mustache freebie came up! 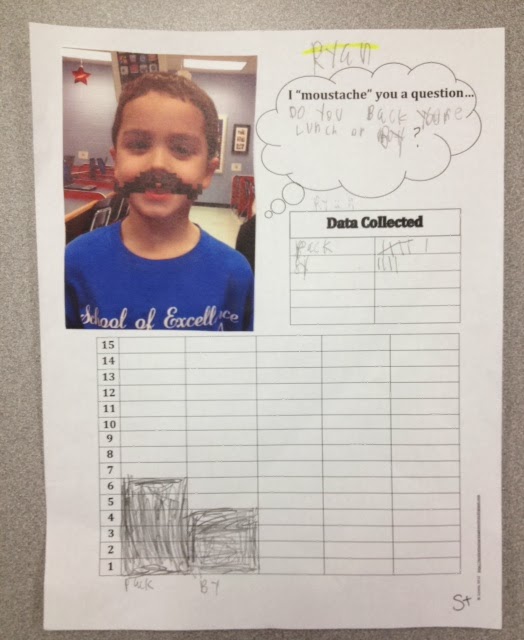 ! So the firs thing that I did was created 14 different survey questions using Google Forms. Then I used QRStuff to link the forms making it easier and quicker for the first graders to access all 14. 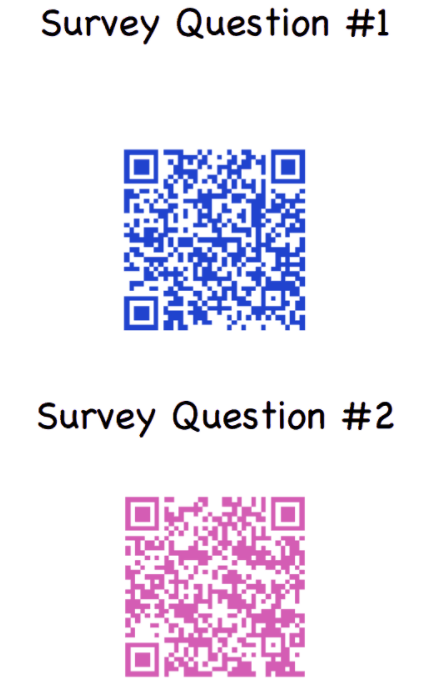 I created and labeled 14 colorful QR Codes and put them around the compeer lab. First graders ARE.OBSESSED.WITH.QR.CODES. so they were so excited to get started! They were cracking up at my mustache picture and couldn't wait to scan the BONUS QR Code after they finished 6 survey questions! 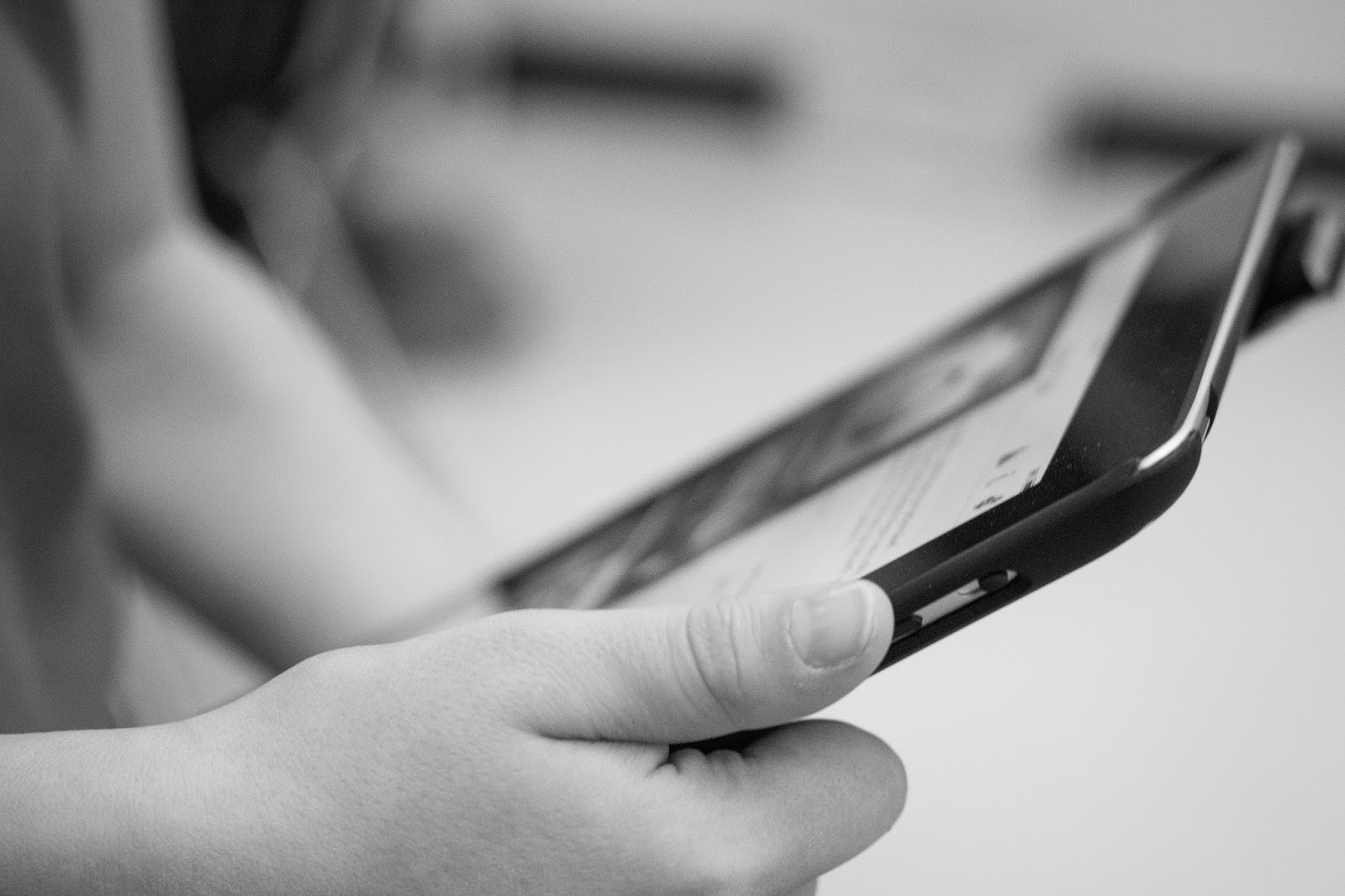 Here are a few of the forms: 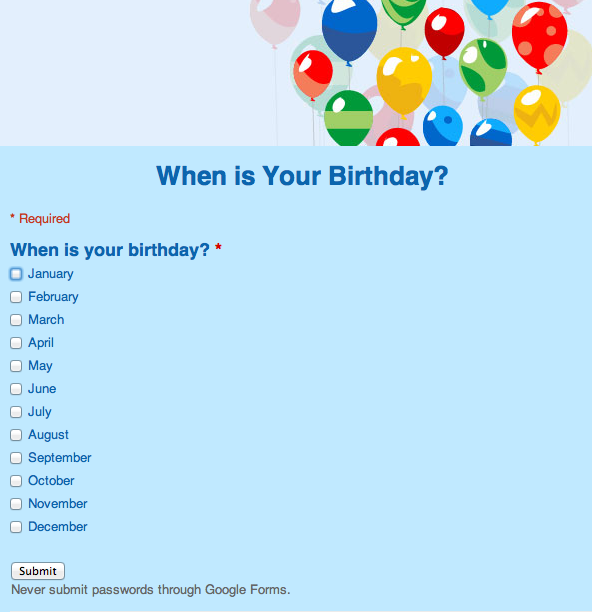 The bonus QR Code had a message to come see me and have their picture taken with the Mustache App. Then they picked their own silly mustache. 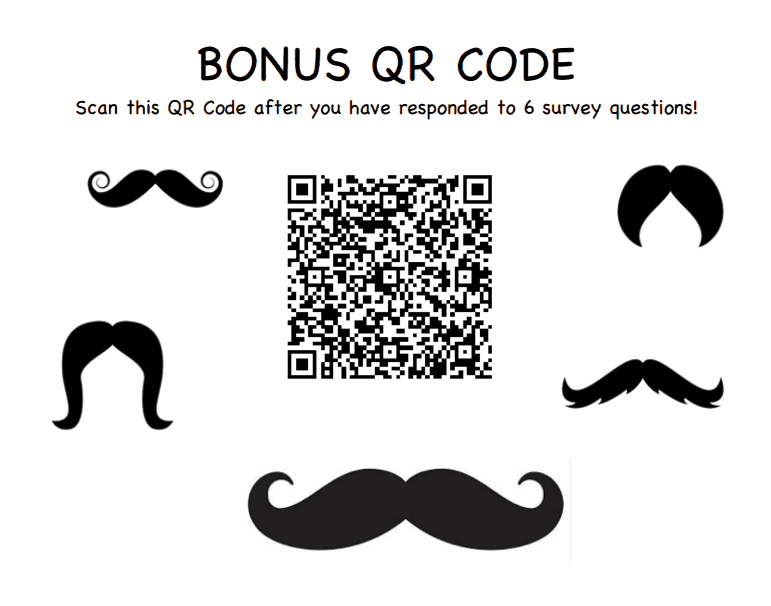 I printed their little mustache pictures! They were HYSTERICAL!!! After they finished responding to the 14 survey questions with their buddy and saws lots of different survey questions they discussed a question that they were interested in asking their classmates. Their question, data collection, graph and graph analysis will be displayed in the hallway! I will share pictures when they are finished! 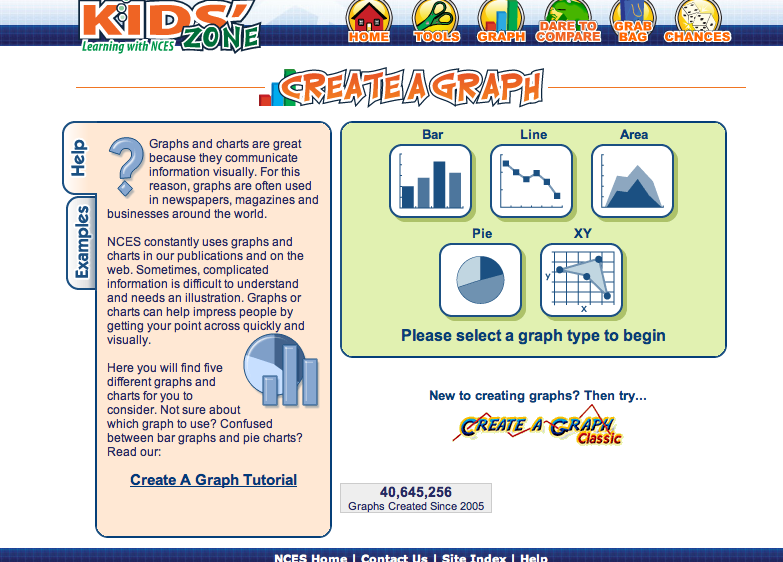 For our third lesson students were paired up and given the data generated from Google Forms. First they counted up the total responses and decided how many answer choices were given (this was differentiated for each group- some pairs got a survey question with 2 responses while others received a challenge with 4 or more responses). Then we used Create a Graph to come up with these jazzy graphs. These are displayed in the hall with the data. In class students will be working during math centers to write an analysis for one of the graphs which will then be added to the display! 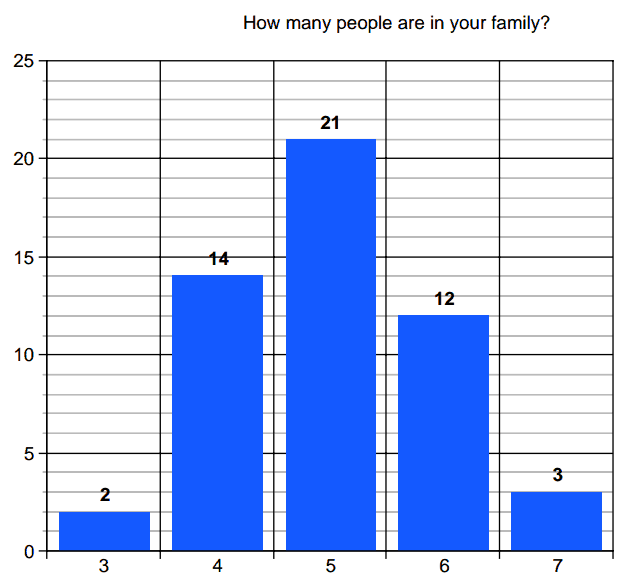 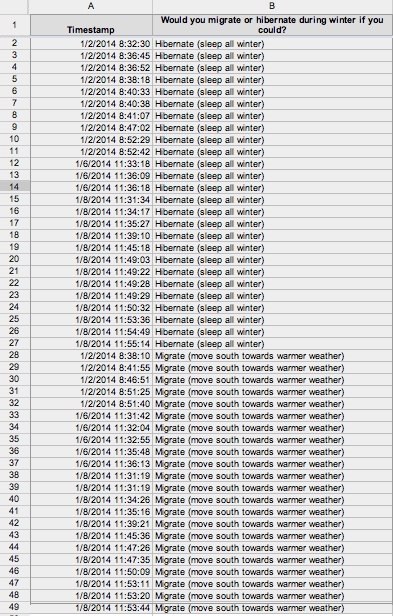 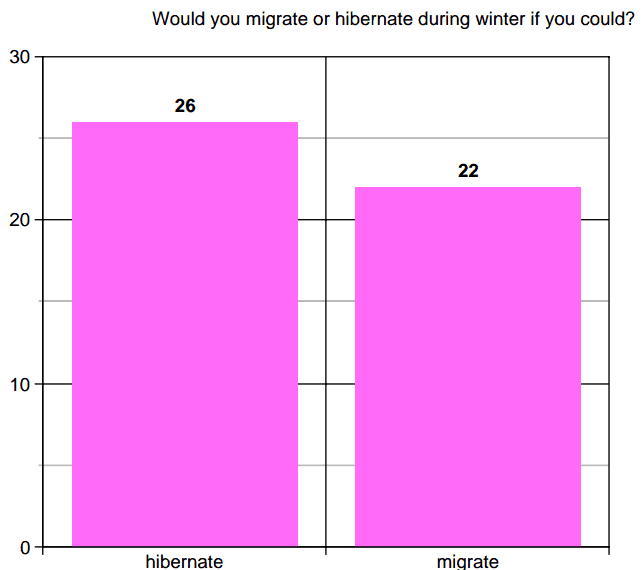 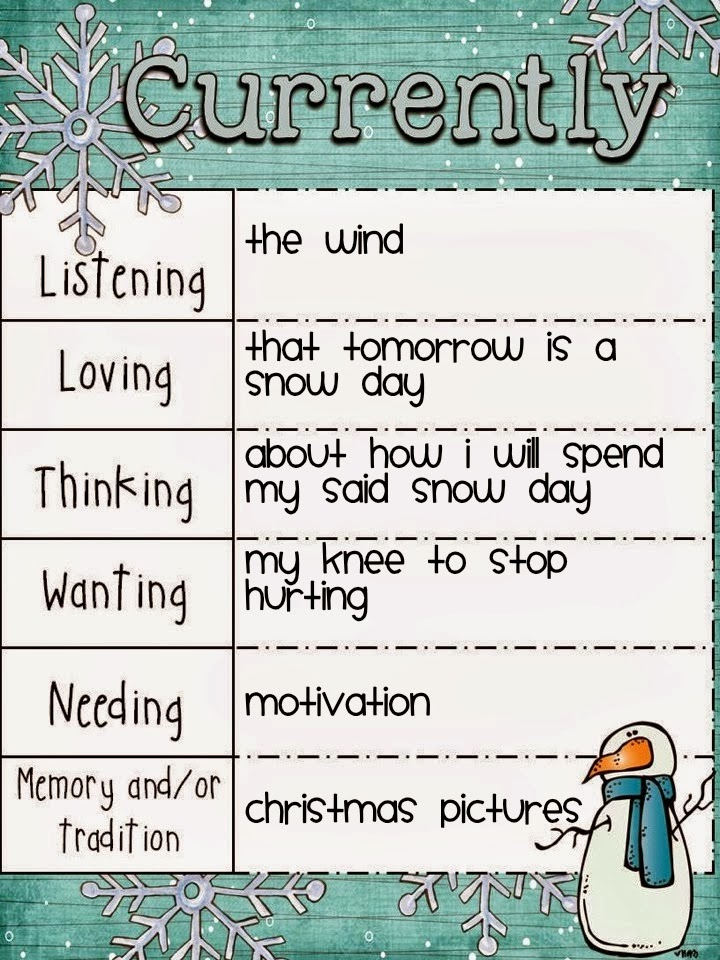 I am a little late to the party {as usual} but I wanted to play and since I had a few free minutes tonight and little motivation for much else I decided to blog {GASP}!

Listening: The wind is really starting to pick up! We have a winter storm advisory for our temperatures and the wind. We could see temps as low as 4 degrees and wind chills up to 30 below. We are setting record lows here in Virginia! As of 1:45 this afternoon school is CLOSED for tomorrow! WOOT WOOT! Snow day with no snow I will take it!

Loving: See above! Winter break ended on the 2nd for us and we were all a little bitter but after a snow day on Friday and a snow day tomorrow I think we will get over the silly two days back! I am starting to get used to this one day working, one day off thing! I think I could handle this on a more consistent basis.  SNOW DAY TOMORROW!!!!

Thinking: Unexpected snow days are always the best because I have nothing that I MUST DO which is lovely! I could take down the Christmas tree, work on my spring promos for my photography business, take pictures of frozen bubbles, clean the house, BLOG, read a book or just stay in bed and watch hours of Netflix.

Wanting: This year I am doing a race a month including a half marathon in September (Nikki the Runner). Yesterday was my first race and I can barely walk so I am WANTING my knee to stop hurting so I could get on with this training business. See below.

Needing: Lately I have lacked all sense of motivation! See above. I need to start training for my races. As a side note let me just mention that I don't even LIKE to run but I have found a love for running races. I was dragged to one and I have been hooked ever since. I love the excitement of a race, hanging out with friends and of course the pictures :)! I love the way I feel after I run too, not during, but after. Since running a 5K and even an 8K came with such ease I decided to up the anti and it's my goal to do a race a month including a half marathon in September! I NEED to get some motivation to start training. I also need some warmer temps which may help with the problem. I also NEED to find my motivation for FETC. I will be presenting at FETC again this year with a  colleague. We are beyond excited about this opportunity and FETC is seriously the most amazing professional experience I've had . We know what we are presenting and the basics of it all but we haven't sat down and flushed it all out. I don't know if it is lack of motivation or lack of time with the holidays and such but I am hoping something sparks and we get the ball rolling, I am losing sleep over our lack of preparedness. Really I could use a little extra motivation in all areas of my life at this moment. 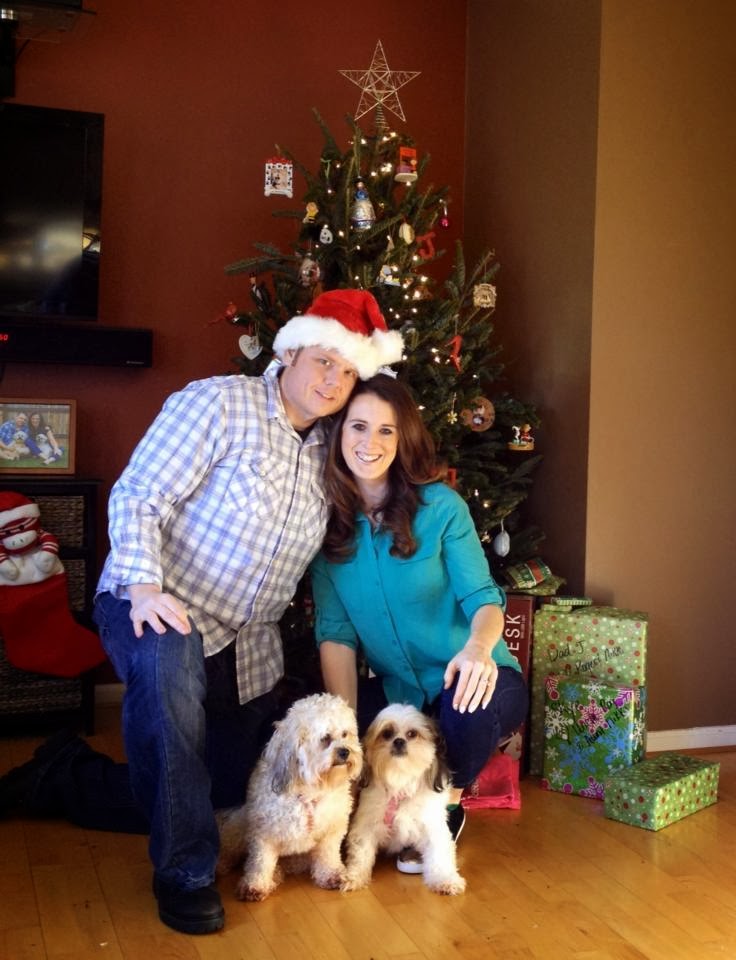 Memory/tradition: this is our third Christmas together and we have made lots of memories and started our own traditions as a family but as a photographer my favorite is photographs in front of the tree! This makes me seem totally lame I realize but it is something I truly treasure!
Posted by Unknown at 6:19 PM 3 comments:

Email ThisBlogThis!Share to TwitterShare to FacebookShare to Pinterest
Labels: currently

As promised, here I am making a quick post as I attempt to pull things together for tomorrow. I know I shouldn't complain since we just had the past week and a half off but let's be serious, why couldn't we just get Thursday and Friday off too?

3rd graders are getting ready to start a huge integrated project on explorers! They will be working in the library, lab and their classroom to conduct research on Christopher Columbus, Jacques Cartier, Juan Ponce De Leon and Christopher Newport. They will be using books in the library as well as this Blendspace (the new name for edcanvas) to gather all of their information. 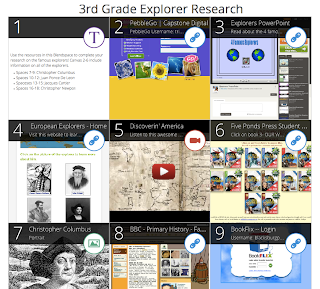 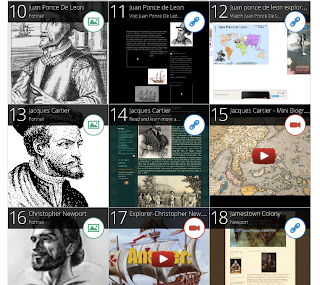 Once they have completed their research they will be able to choose a project for each explorer. There are six projects to choose from. 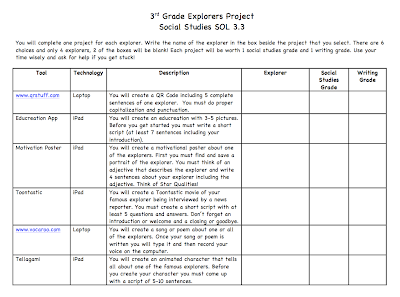 I am really looking forward to starting this project and I think the kids will be excited too (despite having to come back to school on a THURSDAY)! 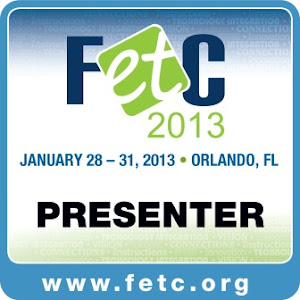 SCANAPALOOZA:QR Codes in the Elementary Classroom 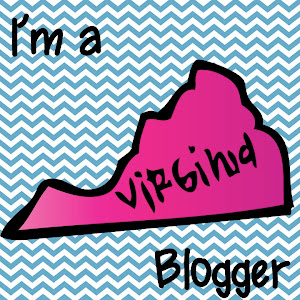